May 7, 2011
In Jason Denning - Landscape Photographer
I had a little lie today after my 2 5am wake ups then headed to Yellowstone for the next leg of my trip. It’s a 2.5 hour drive from Teton Village and I arrived at 2pm and headed straight to the ‘attractions’. 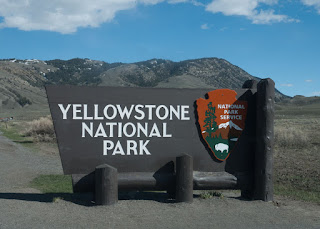 I started off with the Geyser Basins, it’s an amazing place, but big so lots of driving to get the interesting spots. 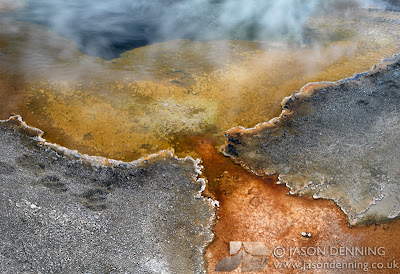 Luckily it’s nice and quiet as the season hasn’t quite started, this wouldn’t be a dun place in peaks times with people constantly walking on the wooden platform walkways wobbling your camera all the time.

I love how it looks like a wasteland on another planet.

The tough thing about this park is it’s very well photographed, so that means I need to try take different shots, hopefully my style is achieving that as I don’t want the same shots as everyone else.

I would spend 20 mins or so in each spot waiting for the wind to blow the steam coming off the pools just the right way, most of the time it would blow at me so I’d be in a steamy rotten egg smelling mist. 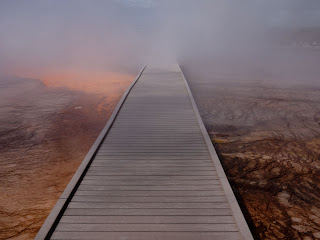 All through the park I would come across Byson wondering the roads.
They almost knew which side to walk on! 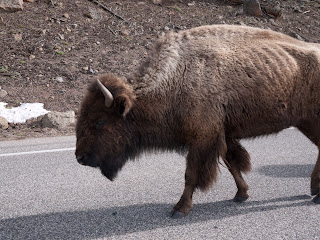 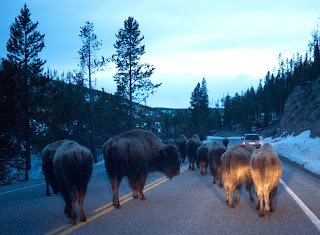 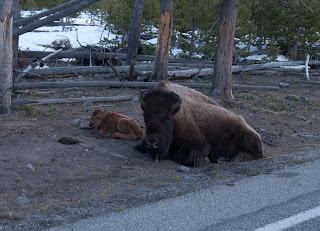 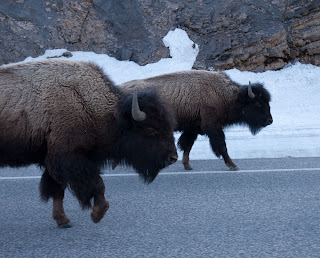 I then went to the famous old faithful geyser and had a 40 minute wait before she finally went off. It seems she is not faithful any more as her timings are becoming less predictable, quite a sight but the surrounding landscape and the light was a bit dull. 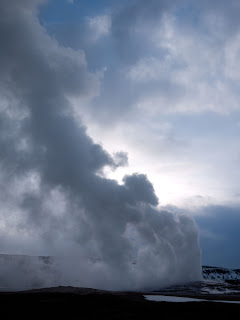 I think I will mainly photograph the small details here, as the wider landscape is fairly boring, but I did spot  a shot looking over the middle geyser basin that I went to for sunset but there was no colour in the sky tonight. I will be back another night, maybe on a clearer day when the sun is lighting up the steam from behind.
For my second day in the park I explored the east side of the park, there wasn’t much going on thermally open at this time of year but I stopped at Yellowstones best waterfalls, its just a shame there is only 1 vantage point for them so I didn’t take a pic on my medium format since it would only look like everyone elses shot. 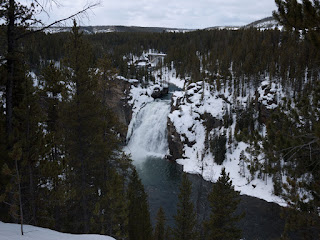 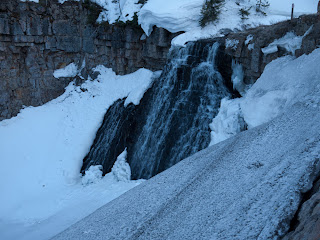 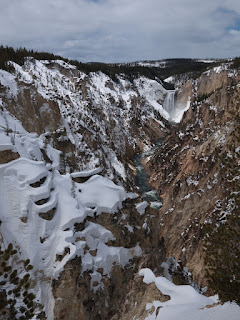 Whilst I was getting shots of the landscape most people around were tourists and wanted shots of them in the landscape, one Asian guy even spent 20 mins in the same location of as me on his own taking pictures of himself in front of different things in different angles, he was going cazy!
It made me think I should atleast get one of me there. 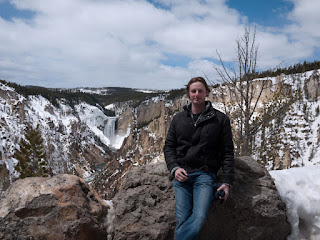 Next was Norris geyser basin, lots more pools although these less colourful than the basins near old faithful. 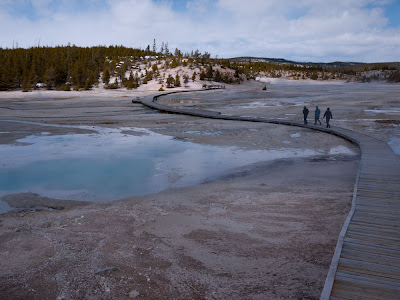 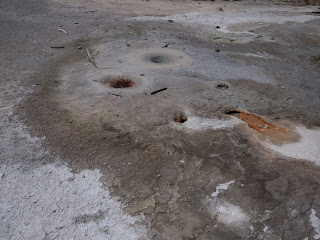 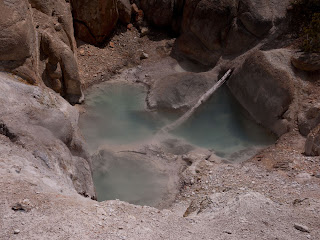 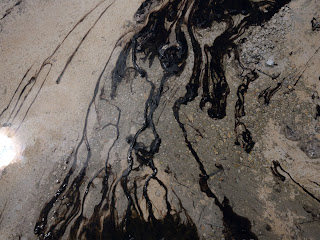 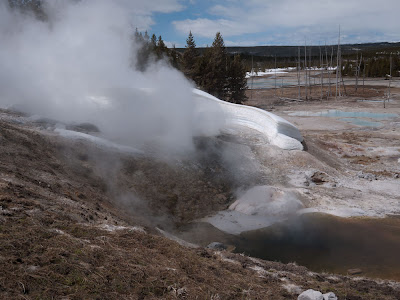 Mammoth hot springs was my last stop today, with more beautiful colours being created on the rocks as the hot water flows down the terraces.  Apparently this place regularly changes as the water flows change and looks totally different today than it did 30 years ago. 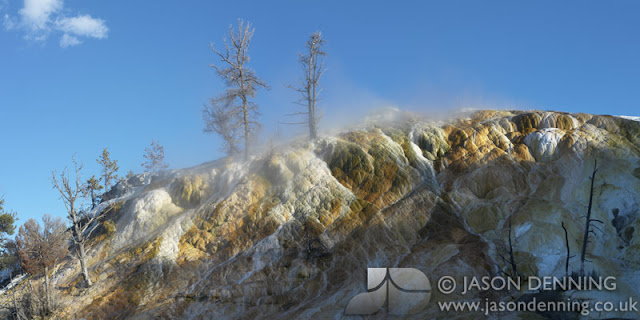 I also spotted an opportunity for another self portrait. 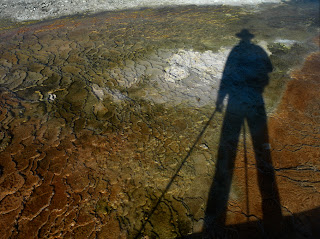 I was in the area at the perfect time for the low sun, but my last shot of the day of the main spring didn’t work out as the sun dropped behind some trees before it could light up the terraces perfectly. I will have to come back tomorrow early when the sun is at the right angle.
I rose at 5 am for my 3rd day in Yellowstone since it was meant to be a clear day, and it was. Lots of shots were presenting themselves as I headed back to some spots I had seen yesterday.
Driving along the Madison river I could see it steaming in places, something I didn’t see yesterday as I drove past midday, so I searched for a spot to capture it, the steam coming from it is very subtle and was more visible in motion.

I then headed back to mammoth hot springs,
It’s a nice shot but still not perfect., I should probably have headed here first but the Byson shot is far better.

For sunset I headed back to the spot or the geyser basin to get the sun shining through.
Just I had finished taking this shot I was moved by the park rangers as apparently there are bears around so they don’t want anyone off the main trails or roads.

At the time I thought it sucked as I may miss out on a nice sunset, but I remembered a spot I saw earlier and headed there and it ended up being far better than the the shot I would have got of the whole basin. 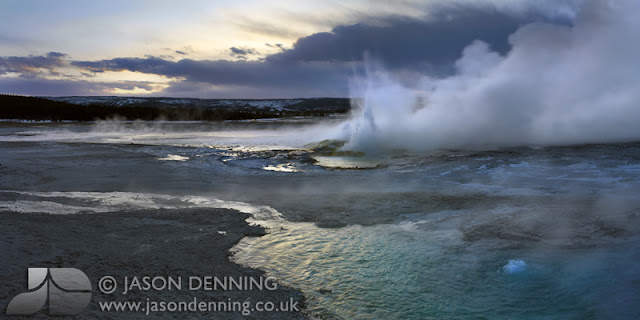 A great days shooting!
After the last 3 days of long days and early mornings I was in much need of a lazy day so spent my 4th in my hotel room going over the shots and relaxing. It was a cloudy day so nothing was missed, hopefully tomorrow will be nicer for some more exploring.
yellowstone landscape photography