I love to go on road trips and when Yann said she wanted to see the Sakura (cherry blossom) in Japan I began planning a 9 day holiday starting in Kyoto and doing a big 2000km circle through the Izu Peninsula, Mount Fuji, the Hot Springs of the Japanese Alps, Tojinbo Coast and then back to Kyoto to fly home. As much as I love to leave things to chance the short amount of time and cost meant I had to plan the trip perfectly to make the most of it.

We arrive at Kansai Airport late on a thursday night, the car rental office is closed so we have to stay in a hotel nearby for the night and collect the car in the morning. It’s a 1 and a half hour drive to Kyoto along the expressways all of which have tolls, it cost $40 just to get to Kyoto! I have planned a full day of sakura sightseeing because we are arriving at the tail end of the season, so it’s the only way to make sure we see the best of the blossom on offer before it all falls to the ground.

Starting in Daigo Temple we visited the Kleage Incline, Kiyomizu-dera temple, Nanzen-ji Temple and ended the day wandering along the beautiful Philosophers walk full of cherry blossom and eating Japanese snacks from small stalls along the way. We had made it just in time and Yann was happy. One of the great things about Japan is it’s sat navs, you can search by phone number which makes it so much easier to find the pretty spots of Kyoto from my master plan without having to misspell the names all the time. At lunchtime whilst we were sat by the river eating some of out snacks, a bird, possibly a hawk, flew down and stole Yann’s lunch right from her hands, it was a crazy moment as I just felt this woosh as it’s wing brushed over my head. Now on top of dogs from her bite in Vietnam Yann is scared of birds. 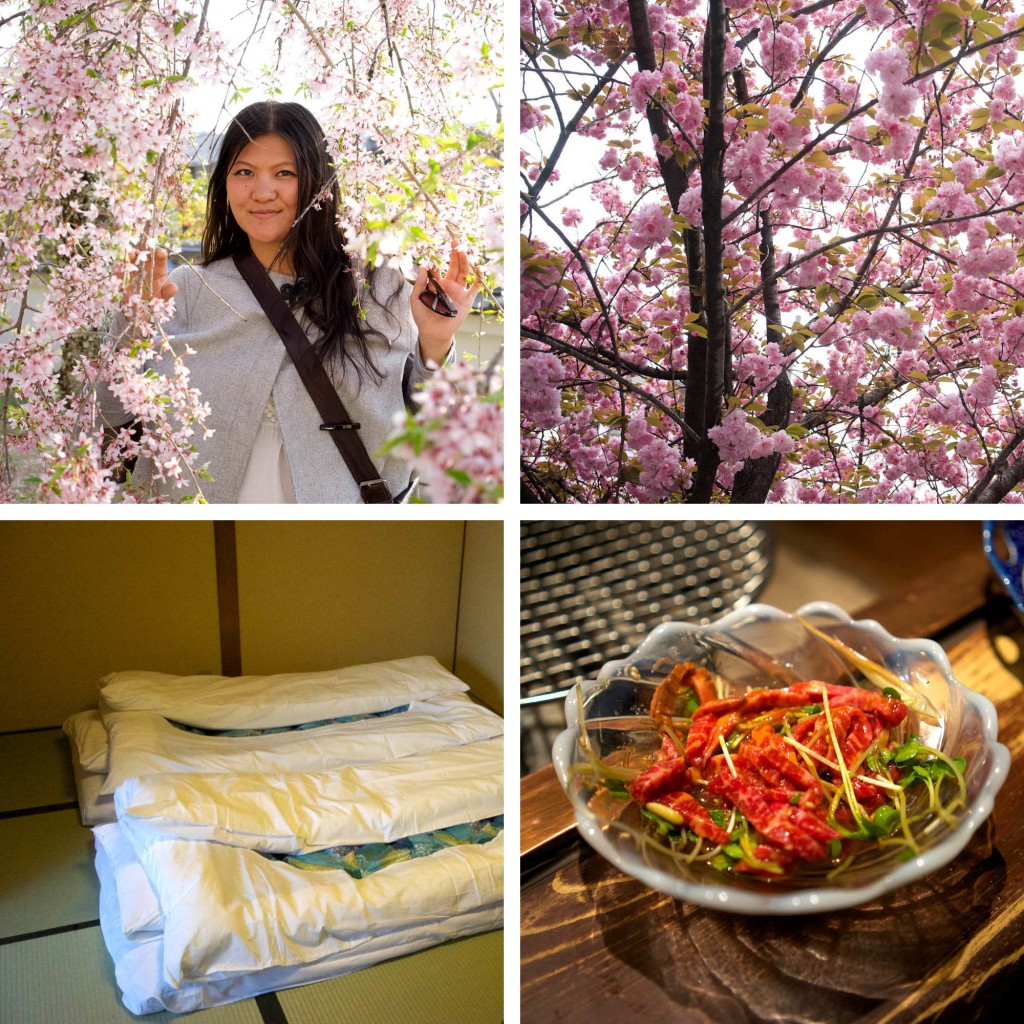 For the whole trip I have booked the traditional Japanese style Ryokan which you can see above, this means essentially sleeping on a futon mattress on the floor and  difference in price is crazy for the same quality in in and out of the city. I had made a map of various trip advisor highly rated restaurants around and for dinner we decided to visit the one I had labelled ‘beef’, called Kyo no Yakiniku Hiro. It was probably the best beef I have ever eaten, we had raw beef with egg picture above, beef shushi, and their best fillet that we cooked above hot coals at our table that melted like butter in my mouth, and it only came to $70. It was so good we booked a table in 9 days when we will be passing through on our way back to the airport. For our remaining 2 days in Kyoto we visited many more temples, to the point we became all ‘templed out’ so then went to check something completely new, a local Bamboo Forest. We arrived early at 9am so I could get a picture without any people in, I got my shot just in time as the tour buses drove in making it difficult to shoot any more shots with the path in the composition. It’s actually quite a small area, I had hope we would be exploring paths for hours but we walked it in 5 minutes.

When you look at pictures of Kyoto online all you see are the pretty temples and parks, what you don’t see much of is the actual city which isn’t very beautiful as a whole when you wander the streets. So I didn’t take a single picture of it myself as it isn’t a city to fill my Cityscapes collection so all you will also see here is the pretty pockets on offer too. I had read that parking was expensive in Kyoto but I wasn’t quite ready for the reality, in our 3 days we racked up atleast $200 in parking costs, the most expensive during our  beef dinner at $12 an hour, quite a shock from a Londoner used to free street parking at night.

The last place we visited was the beautiful Fushimi Inari Shrine that winds it’s way up the hills, it was both a dream and a nightmare to shoot, so many angles to choose but so many people walking through frame to ruin it, we arrived too late and it was getting dark so I plan to revisit when we pass through Kyoto again.

On the road our next stop is the small town of Tago on the Izu Peninsula, 360km away which meant $80 in road tolls, it was worth it to see the  pretty coast and eat best Unago ever in the small fishing town. It is going to be an expensive trip but atleast now we are out of Kyoto we won’t have to pay for parking anymore. There were many interesting coastal formations to explore but my favourite are the 2 arches I was able to line up and shoot below.

Mount Fuji is only 100km away from Izu so we had a nice scenic drive along the coast and stopped at the impressive Shiraito Falls nearby, it was a real pain shooting the panorama because the wind kept blowing water on to my lens but with some persistance and lots of cleaning I nailed it. The timing was perfect with the light illuminating half the waterfall.

We explored the 5 lakes around Mount Fuji at sunset and stayed the night at Lake Kawaguchi, I planned this so I could get a sunrise picture but the sunset was so nice I didn’t  wake up early, luckily for me it was overcast so I didn’t miss a beautiful sunrise.

On our way north into the the Japanese Alps we stopped by some wineries to see how they make Sake and my favourite, Plum Wine, buying a few bottles to drink at our next stop, the Okuhida Hot Spring Villages. I was surprised to see that apparently playing music to the sake can change the taste, or something like that. Obviously only classic music though.

We stopped for dinner at a renowned Unago place in Matsumoto City called Matsuka, however it just didn’t compare to the eel I had  on the Izu Coast and was twice the cost. I had booked us into a Hot Spring Ryokan in the mountains called Okada Ryokan for 2 nights which included a huge multi course breakfast and dinner both days. We went up the nearby mountains in the morning on the cable car and then hiked for an hour in the snow, Yann didn’t look very happy all the way up as it was steep and slippery and we only had hiking trainers on however coming back down made up for it as we slid on our bums most of the way beating the hardcore hikers with ice grips and hiking sticks. Back at the base we warmed up in an outdoor public Hot Spring which was so hot it felt like I would boil if I was in for longer than a few minutes. There was a old guy in with me who kept trying to show me a way to peek into the girls side, dirty old man!

Many of the roads in the area are still closed for winter which meant my planned scenic route to take us to Tojonbo Coast in the north was out of the question. The trees were mostly still bare anyway so it wasn’t so picturesque and we probably didn’t miss much but I could see the surrounding mountains would be amazing in autumn. We arrive at our last stop, Tojinbo, just before sunset and I rush around shooting what I could before it was too dark realising I would have to come back in the morning to shoot it again for the best light.

Having reached day 9 it was time to to head back through Kyoto to the airport, on the way we stopped at the cool Shirahige Jinja Shrine in the huge Biwa Lake for lunch, it such a beautiful spot but right behind us was a busy road.

Back in Kyoto I dropped off Yann to do some shopping whilst I headed back to the magical Fushimi Inari Shrine to shoot as much as I could in the 2 hours before I had to pick Yann up to head for our dinner reservation for more awesome raw beef. I had to be patient waiting for breaks in people to open the shutter for the 8 seconds needed on each exposure.

In the end we spent close to $4000 on the 9 days, similar to our trip to Italy 2 years ago but I remember italy being more fun, I think because there was more to see along the way. $500 alone was on parking and road tolls which is crazy but at least the roads were never busy, I am very happy at the number of great pictures I got though which outnumbered the italy trip but 3 times.