A week in Olympic National Park

August 1, 2011
In Jason Denning - Landscape Photographer
The forecast didn’t look good on the Olympic peninsula but as I had nowhere else planned to visit I figured I would take my chances.

For the first 2 days it was cloudy and rainy which was not great for the coast which was my main reason for coming but gave me time to explore all the beaches and plan what shots I would want to get and at what time of day. I found my perfect sunset spot on Ruby Beach and even though I knew tonights sunset would be rubbish I couldn’t take the risk of by not being here. It was rubbish so sadly I will have to come back.
It was however perfect weather to explore some of the amazing forests they have here now that I knew my coastal locations for when the sun would hopefully rear it’s beautiful head.

Hoh rainforest had a famous Hall of Mosses trail which for a brief period had some sunlight. I find it interesting how I expected to walk through a whole forest like this bit it was actually only a small section that you see in the picture. Still an amazing lace to walk through.

I was hoping to photograph some of the giant trees they have here but couldn’t find a decent shot to take that would show just how big they were.

On the way out of the forest I was passing one of the densest forests I had ever seen so I went wandering through to get this. Not a place you would want to get lost in as I couldn’t see the sky!

The main waterfall of the park, Sol Duc falls was next on my list, but I was more impressed by the small creek along the hike and ended up taking a detour off trail up the stream for this gem. 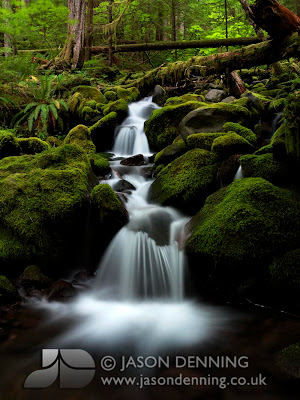 And here is Sol Duc falls.

The great thing about most national parks is that they are so big you can visit so many beautiful places and by completely alone, not one person came to see Madison falls whilst I was here which is rare for a waterfall in a national park.

On a misty morning of my third day I hiked 3 miles to Shi Shi beach on what was the muddiest trail I had seen yet. 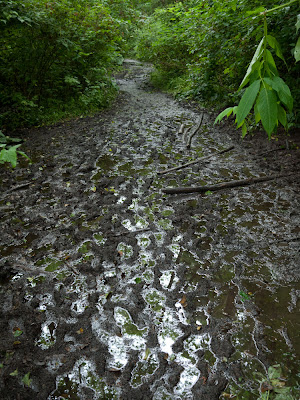 In the end I gave up trying to avoid it and got incredibly muddy.

It was certainly worth the trek as the mist created a great atmosphere with the rocks and waves.

The clouds finally disappeared in the afternoon and so I went to Ruby Beach to get some shots I discovered on my first day here.
It’s a great beach with lots of rocks sticking out of the sand and the thankfully it stayed clear until the evening to get these. 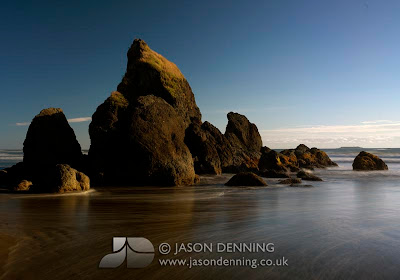 As it was so clear sunset again was a disappointment, it seems it’s either too cloudy or just too clear for any decent colour here.

I stayed over night nearby the beach so I could get up early and take some shots with the different light.
I found myself waiting for ages for the water to hit just right. 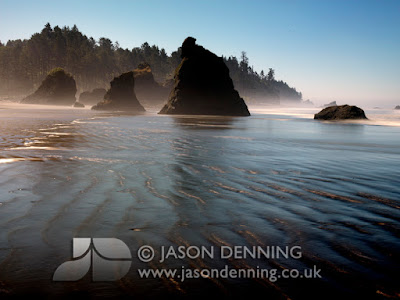 A small town called Forks was my regular stop near the park and it turns out it was the town from the Twilight books, but no shooting for the movies was done here due to the rainy weather. There were plenty of hotels advertising Twilight themed rooms but  I decided to pass since I wasn’t a fan.
Everytime I drive into the town I would see someone taking their in picture in front of the sign, I don’t recall one time I didn’t see someone in over 10 passes! 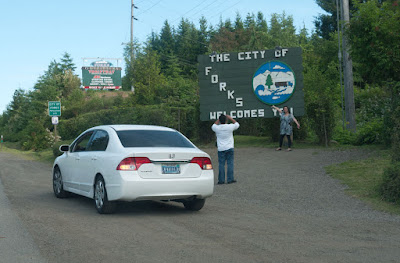 A feature of the park I had yet too see because of the clouds was the Olympic mountains, but sadly I wasn’t so impressed by them, most likely because I had just been to the Rockies, and area that’s is truly hard to beat.

At this point I had explored most of the park an it was now a waiting game for my main sunset shot on Ruby beach. I parked up a mile away at a spot that gave me a good view into the distance so I could watch the clouds and take a nap. Foolishly I left the radio on and a camera battery charging which meant when I woke I had a dead car battery.
Eventually a state cop came by and jump started me but I did miss the first sunset in the meantime, not the greatest sunset but what if it’s the only one?! Ahhhhhhh.
The next morning I visited Cape Flattery which is the most north western part of continental USA and a great spot for viewing  wildlife if only I was interested in shooting animals.
At first the light looked a bit dull but slowly some mist blew in for this shot. 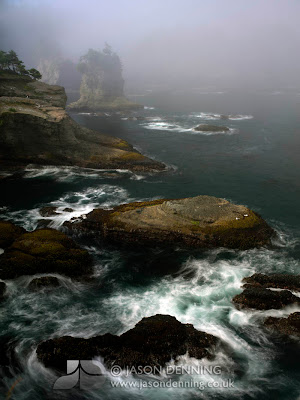 It was interesting as the mist almost seemed to breath in and out as it would leave and come back every so often.
On my return the forest I was met by this spectacular view, I have never seen this before and after taking a shot on my Mamiya 645 I rushed back to get my 617 camera as it was too good to miss getting it on film.

The clouds were looking promising today for getting a great sunset finally after 6 days of waiting. I got it but it wasn’t easy, firstly now the tide times had changed meaning my spot from the first day was under water, so I chose a spot a little further back, but slowly as I waited for some colour the tide got higher and by the time sunset was in full swing the water was breaching the top of my waterproof hiking boots. I also managed to drop my light meter which normally wouldn’t be a problem but it landed  onto wet sand which clogged all the buttons up so it no longer worked meaning all my remaining film exposures had to be guessed. So I will see if they turn out.
Luckily I got it on digital as a backup as it would be a huge disappointment to have blown the best sunset of the trip. It made me remember why shooting on beaches can be annoying with changing tides and sand.

With that in the bag I could head back to Vancouver and I am happy to have a break from driving and shooting, I’ve seen so much in the last 4 months I’m happy to just do nothing.
To fix my light meter I had to completely take it apart and clean out the buttons so now it is working again but it made realize how important it is so I quickly bought another from eBay.
Olympic national park landscape photography