This month marks 3 years that I have lived in Singapore so it’s a good time to share all my shots from this small but jam packed Island. Living here gives me plenty of opportunities to capture the scenes in the best light by going back again and again until I feel I have nailed the shot.

The first shot I wanted to capture when I arrived was an impressive cityscape; something that shows the best of Singapore. I discovered this spot the on my very first walk after the long 14 hour flight from London. I have been back over 30 times all around Chirstmas since this is the time of year when the sun sets behind the scene. For the first 3 years the best I had got was the one below.

Whilst it’s pretty, it’s not the shot I have imagined so I kept trying and finally got the shot in January 2016 close to my 3rd anniversary in Singapore I was determined to nail it this year and foolishly with a 30 minute double exposure- something that has failed many times. All the effort paid off and I captured the beauty below.

With some locations, however, I am much more successful. This shot from the east marina at sunrise I only had to visit once, which I am thankful for since it means getting up incredibly early, I am definitely a sunset person. I used a 10 stop ND filter for a 4 minute exposure to get the rushing clouds in the sky. I was very lucky as the beautiful light you see shining on the buildings was only there for 6 minutes,the rain clouds moved in soon after.

To capture the sunset of the same scene I only went 3 times before getting this beautiful light with a 45 minute exposure using 16 stops of ND filters in front of my lens.

Singapore has a unique CBD that viewed form the right angle across the Singapore River is a wall of buildings with no sky in sight, one of very few of my shots that don’t rely on the right light to take it.

The Gardens by the Bay only opened months before I arrived in Singapore. It’s a beautiful place to spend an afternoon, and the Supertree Grove is a must for any visitor during the evening light show. I was lucky to for this shot to turn out as so many people surrounded me I was worried the shot would be blurry.

The Shophouse is something unique to Singapore and Malaysia, a mix of Malay, Chinese and European architectural details that have thankfully not all been knocked down to build a new hi rise condo. Many can be found in Chinatown but have mostly been ruined with restaurant signs, but these on koon Seng Road keep their original charm. There are bins the ruin the look of the scene so I moved these out the way for the shot. I have since searched and searched for another set of shophouses to capture but none can beat.

Something unique to Singapore is the F1, its the only race held at night and last year I grabbed walkabout tickets and spent hours shooting the cars as they rushed by. Out of the 300 shots I only had a handful sharp, it’s not easy shooting at ½ a second exposure with the speeds they drive, and you wouldn’t believe the how loud it is. I could only bare standing so close by using ear plugs.

Chinese New Year is a huge celebration here and I love going to shoot the events with all the lights and lanterns, there are so many great vantage points to be found with many accessible buildings, and car park rooftops.

I love the docks that surround Singapore, because of their location so close to the city there are so many great vantage points to shoot them. My favourite below was taken from the roof of a newly built condo, the Skysuites. Its a great spot to watch the sunset and shoot and I ended up going up on 7 different occasions for these 2 killer pictures. A total of 10 hours up there snapping away!

My friend Sandra has a great view of the City from Sentosa Island, and I found myself on her balcony a few times trying to capture this angle at its best, seeing the huge ships come into the port is an amazing sight with the skyscrapers behind.

Living in Singapore during the SG50 celebrations was an incredible experience with all the shows to photograph, and I couldn’t miss getting the perfect shot of the fireworks, the most spectacular the city has ever put on, with my panoramic ratio perfect to showcase the whole display.

It’s been an incredible 3 years here travelling around Asia, but I think I may have neglected shooting Singapore too much since my collection of images is smaller than Hong Kong. On that note I think I will go out and shoot right now! 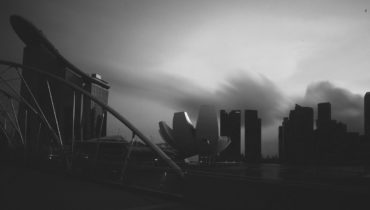 A new life in Singapore